Inking up Changito and another too busy weekend!

Whose never had a busy weekend?? I don't think I can credit my name with too many relaxing, do nothing weekends. For me, it's a time for catch up for all of the projects that I wasn't able to accomplish during the week. Well, this weekend, I was able to make some cards, hopefully to use as RAKs. Here's one of my new Changito stamps I just got from Jen. Isn't he so cute?? I used him on one of the Valentine's Day cards I made too, that will be posted during the week. I was playing with color combinations and came up with this funky one. I like it! The card base is chocolate chip. I layered ballet blue and apricot appeal. Then I found a DSP scrap to add to the layer. The image needed something to frame it because it looked too blah...I liked the old olive! Of course, althought I "try" to keep it simple, I can't resist adding more embellishments. I added some mini rhinestones to the middles of the flowers and then the 5/8" grosgrain old olive ribbon. I used my brown copic pen to color the body of the monkey, all other pens were my SU pens. 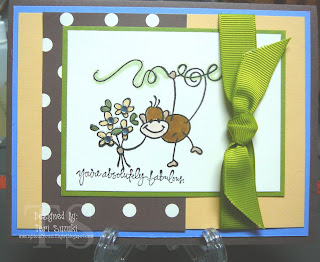 Here's a close up of the bling: 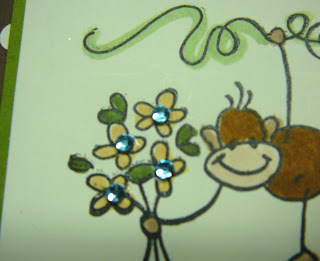 Well, cousin Jeff was back in town for a little R'nR. Last night, our family celebrated Chinese New Year. Our celebration really is celebrated by eating the traditional chinese food. Sister Cara helped mom do the cooking of the Jai (monk's food - vegetarian) and the pork and chinese potato. So much work to prep and cook. We ordered "normal" chinese food from Yen Yen for everyone else who didn't want to be traditional :)
Here's a pic of my brothers-in-law Rick on the left and Clyde on the right. Jeff traveled to the islands with a friend, Linda, as she was attending a convention at the Hawaii Convention Center. (Thanks Ally for taking this pic!) 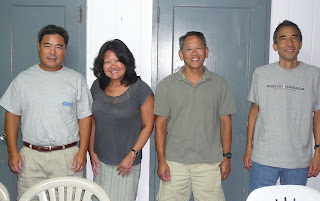 This pic is too funny. I just don't know how to take self portraits. I tried to take one with my two sisters, but I think I have short arms - hahaha!! We asked the girls and they told us only "young" people can do this. Maybe so! 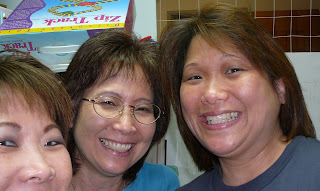 We came to the conclusion that maybe Ally was right and gave up doing self portrait photos. Ally (Cara's daughter) took our photo. 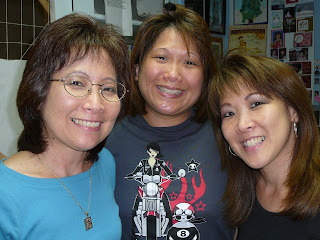 Guitar Hero seemed to be the highlight of the night for the kids. Nolan had a classmate come over for the night and he brought his own guitar. They had a blast! 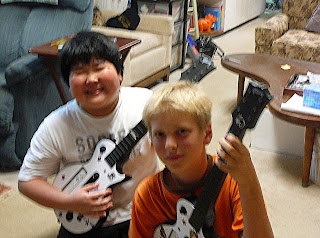 The girls pose for a pic - where was Jodi?? Sorry Jodes, I missed taking a pic of you tonight!! 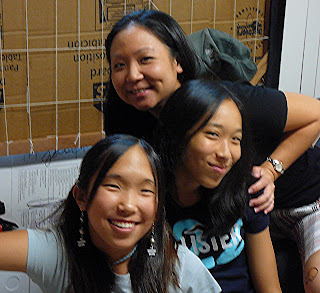 Well, today, I'm spending the rest of the day finishing up 40 of these babies. Speaking of baby, it's a baby shower invitation for my buddy Lynne. She and hubby Tony are expecting their first baby! I did keep this one simple as I need to make 40 of them! Have a great Sunday everyone! Looking foward to sharing more with you this week! 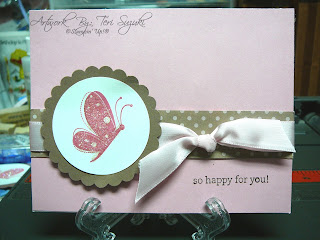 Nice card & baby invitation card! Looks like a great time was had by all! Cute RAK's from Dawn!

Loving your blog and tagging you on mine.

Thanks for sharing all of the pics - love the 3/4" grograin ribbon - really adds to the card. Your baby shower invitation card is cute too - they will enjoy receiving it.

Love the FAMILY pictures!...I can never get those self portrait pics either...however my son is awesome at it...EVERYTIME!....The monkey card is super sweet.....and I LOVE the shower invite....how unique!!!...THIS is why we make cards!!...who needs Hallmark!???