A tisket, a tasket - a cute Easter basket!

Well I goofed up. When I planned my February projects, I totally did not think that Easter was early this year!! The Easter bunny is scheduled to hop on over on March 23rd this year!! Well, too late to include Easter projects next month since my classes are at the end of the month!! So...my customers were treated to yet another bonus! We made cute baskets using dixie cups. I see this idea on many of the blogs so decided to give it a try. I tore one cup apart to get the pattern. Traced it on a cardboard and ta-da! the pattern...We then traced the pattern on DS paper, cut out and using the SU glue stick, adhered it to the cup. We embellished it using last year's cutie bunny...I just love this bunny!! The tiny flowers were punched out using the punch from the Three for You punch box. We used 2 flowers to form "the flower" making sure that the top flower was scrunched up a bit to give it some dimension. Of course, we needed to add some bling to it! 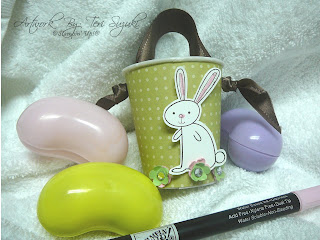 You can see the flowers better in this photo. We added some chocolate chip satin ribbon for the handles! I ordered these cute jelly bean shaped containers and filled it with jelly belly. 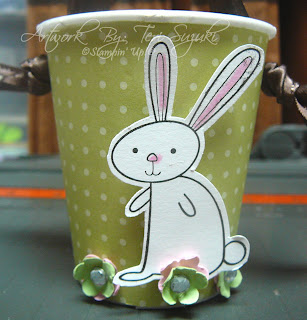 Had to mention that the Pan Pacific Championships were in town this past week and Nolan wanted to go so bad and since Eric was able to switch his work shift with someone, it was set. Nolan invited his buddy Errol to come along with us. I really didn't feel up to going out and was really going to stay home, but decided last minute to go anyway. We were able to get tickets at half price! The price of the food was another story ($7 for a 12 inch hotdog? - sheesh!) This lady that was walking in with us said she spent $60 for her ticket but I'm sure she had choice seats. She said she came to see David Beckham - I guess that was one of the highlights...also Hawaii's own, Brian Ching. Here's a picture Nolan took of David Beckham, not bad considering we didn't have one of those awesome cameras with a humungous zoom. All in all, it was an exciting evening, although my advil was beginning to wear out and I kind of fell asleep towards the end...zzzzz 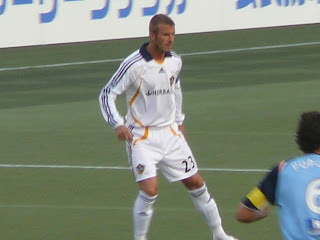 Thanks for being patient with my posting...this weekend was hard getting back into the swing of things. I'm feeling a bit better but still have those shocks of pain every so often. Can't wait to feel normal again!!
Posted by Teri at Tuesday, February 26, 2008

LOVE SOCCER...not so much beckham but okay..at least he came and at least he played...that must be counted for something...right?!
well, I'm so bummed out that I keep missing the classes...Taelyn's
season is done, but mine is starting up again...sigh...I love both...will have to fit it in somehow. thanks for always sharing such wonderful ideas! JOY

Thanks for reminding us that Easter is right around the corner! I started on my Easter cards today, I posted one on my page. If I have time I will try that cup/basket you made. I like the adorable bunny stamp.
Denise

Luv that Easter basket...way to go girl!!! Nolan must have been thrilled to go to the game, bet he had a great time!

I love that dixie cup basket! So ingenious and cheap way to make a basket! I love it! Stampers can find anything to use as a craft item! LOL

What! You fell asleep on David Beckham? LOL! He's not my type. . .too metro for me! I don't like men who "fix" themself up more than women!

Cute bunny cups ... but I would have a hard time using that ribbon as a handle. It's too bad there weren't more people at the Stadium to see the games but at least it's a first to have professional soccer in Hawaii.

Very cute bunny cups...perfect for jelly beans! I don't know too much about soccer, but I hope it was fun for Nolan.
malieta:)