The other day, I got a call from one of my friends that I ride the bus with. My friend Rod, who works for the Coast Guard Auxillary, has a friend who is ill and has been in the hospital for a while. He asked if I would make a card so that he and some of his co-workers could give to their sick friend. How could I say no?? Rod told me that he always sees me showing my GF the cards and projects that I make and he really wanted a special card. Aww, how sweet! Here is the card I came up with: 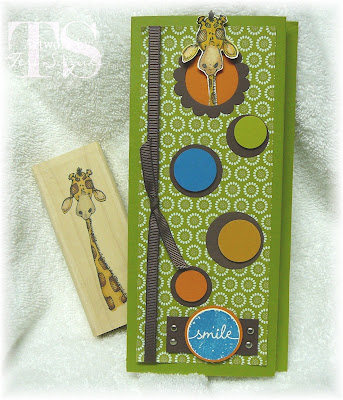 He told me that there were about 12 people that will be signing the card, so I made it a "long" card - gee, this would have been perfect for Jen's LCWC challenge a while back (was it #10?). Anyway, this giraffe is a whipper snapper image and I originally was trying to follow a cute tri-fold card I saw on Dawn's blog - Dawn's Stamping Thoughts. But it didn't really work out because I thought of having this giraffe's head and neck stick out of the hole. 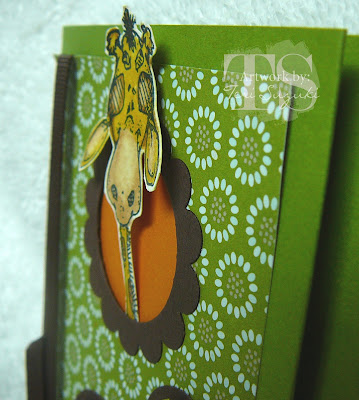 So, I ended up covering the hole with pumpkin pie CS. I added dimension to the back of the head so it would look like his head was really coming out of that hole. Good thing this card was for a bunch of guys who don't know the difference in the card making department...haha! 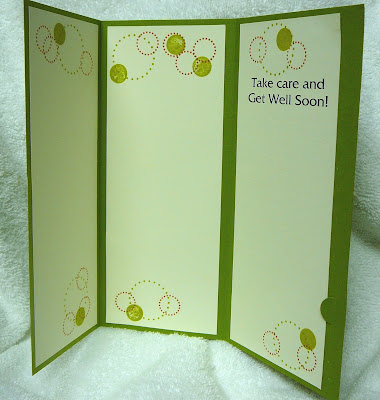 Here is the inside of the card. I think it's enough room for 12 guys to sign...guys aren't as "wordy" as us girls (heehee!). Anyway, thanks for coming by today...I'll have a cute mini tutorial tomorrow on a cute favor using a couple of manila tags (from an office supply store) and cardstock...I found this while cleaning this weekend and have revised it to fit a larger tag...more tomorrow :) xoxo

This is such a cool card with the giraffe's head sticking out. I am sure all the guys will love this card that you made for them to sign for their friend that is sick. The card will definitely put a smile on their friends face.

super cute and creative!!! love it!!!

That is so neat! I love the way you put the giraffe sticking out, also the space inside the card for all the get well wishes. I need to try a #10 card.

Super cute! I know they will appreciate it. Such a great idea and I love the colors.

This is a really nice card Teri! Love how the giraffe's head comes out of the scallop circle. =)

cute card...love that giraffe! what an idea!

This is great...super idea to have his head peeking out!

Such an awesome card! Highly creative with the Giraffe placement.

Such a fabulous card & I know their going to luv it as much as the recipient! I luv what you did with this card Teri, the giraffe looking out the cut out in 3D is so darn cute!!! I may just case this card!

Talk about a super cute card Teri!
I LOVE your card and the giraffe takes the cake....too cute!
The guys are going to love this card!!!!