This image of Elliot Elephant by Dandelion Designs, is such a happy image! Just stamping and coloring him made me smile! Thanks Jean for bringing him to life! I've been having such stressful weeks with all that I need to accomplish, that making this card kind of perked me up! 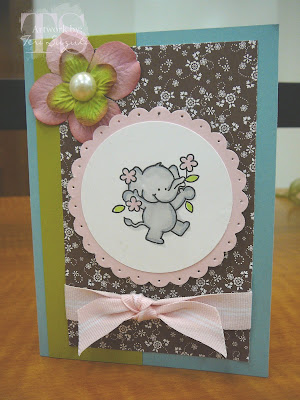 The cardstock, DP, ribbon and pearl are from SU. Flowers unknown (I got them from a rak!) 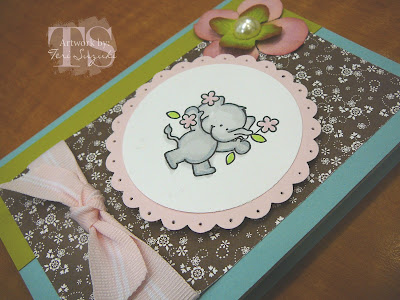 Made this card to send in a rak. The color combo is a different one, but I kind of like it!
Here's one of the reasons for my extra stress. I had to juggle my work schedule so that I could pick Nolan up from a special and mandatory band practice/rehearsal three days last week as he was selected for a second year to participate in the Honor Band. This involves driving over the mountain a few times in one day. This was the second year that Nolan was selected to play in the Honor Band. This 2009 Music Festival was sponsored by the Hawaii Music Educators Association and the Oahu Band Directors Association and the concert was held at McKinley High School Auditorium. The music was awesome! Here's a photo of Ikaika, Nolan and Royce after the concert. 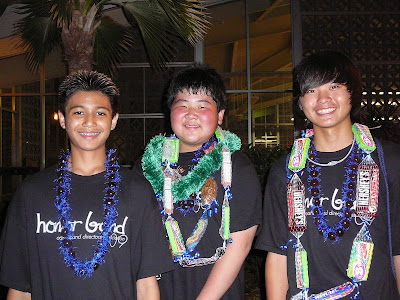 I made 10 of those kukui nut lei's, well actually, I crocheted the Pua yarn around them. As fast and easy they are to make, it still took me a couple of hours to make 10 of them. Nolan was all sun burnt as he had a soccer game over at the Waipio soccer park from 10:30 to 12:15...it was a hot but beautiful day!!
Thanks for coming by today...more posts to come! Have a great day!
Posted by Teri at Tuesday, May 05, 2009

Your card is so sweet! I love the colours, the image,... Great!!

Congratulations to your son!

This Dandelion image is so cute and you have turned it into a very nice card. I love the colors you used, and glad this made you smile away some stress with your heavy load and driving Nolan around. But, congrats to him for making the Honor Band again! It's hard work for a mom but he'll be out of school before you know it! You're like the Energizer bunny... going nonstop! Take care of your health ok? Hugs, Cami

Hey girl! Man, you have been busy! You are such a great Mom to Nolan and even though it might seem like he doesn't appreciate you (he's a teenager), you know he does! Congrats to him for making Honor Band two years straight! Please take good care of yourself, Teri, and be sure you eat! LOL! Big hugs, Linda

By the way, great card! Love the color combo and your coloring of Mr. Elliot! I never thought I could use Jean's stamps on a regular size card, but you just showed me how! THANK YOU! xoxo, Linda

Congratulations to Nolan for being chosen for Honor band! What a sweet mommy he has to crochet all those leis, where does she find all the time? BTW, your elephant card is darling...he looks so happy to be on your pretty card! :)

Gorgeous card Teri, such a cute image and i love all the lovely detail. Congratulations to your son. Hugs Nikki x

Congratulations, Nolan, on being chosen for the Honor Band for two years straight. All that practicing paid off and I'm sure you are proud of him too.

What a creative way of layering the card! Congrats to your son on being selected to play in the Honor Band for the second year! You must have had to be working from before daylight. And, the leis turned out beautifully.

I luv that color combo Teri & agree that this image is great to lift ones spirits & make them smile!

Congrats to Nolan! Wow, you were a busy bee, the leis look great!

Your card is so cute and the elephant is adorable Teri!
Congratulations are in order to Noland...way to go!!!
hugs
Risa:)

The elephant is so cute and happy! Wow, congrats to Nolan for being honored! Hey, can you teach me how to make that kukui nut lei? They are perfect for graduation. Thanks Teri!

the elephant stamp is just too cute!! =) love it!!

Love your card, so cute that image!!! Yay Nolan!!! I remember being in band, such a great family unit. I bet he is having a great time with all of his band buddies.

Very cute card, and the color combo is great! Congrats to Nolan!! You have just been as busy as ever, but you always manage. Great job on the leis too!
Hugs,
Jodi=)