As promised, here are the giftcard holders that we made in this month's class that happened last weekend. I received one of these neat GCH's from my girlfriend Michelle for my birthday and just HAD to learn how to make this cool holder. Thanks Michelle for helping me learn how to make this. I used the cool snowman from the Shellebrate set. I like the look of not coloring the whole image but just highlighting. We used bashful blue refill ink and a blender pen to color the waves. 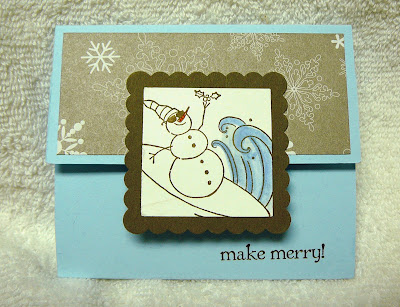 Here's the holder opened...the insert has a little fold that holds the giftcard. 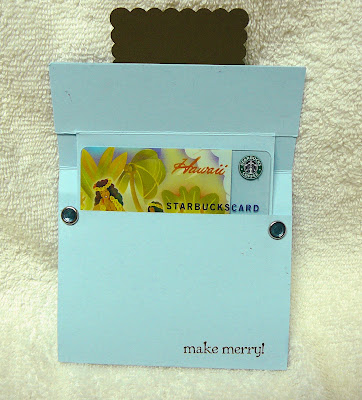 This next card is the same concept except that it's a little larger and two punches with the slit punch hold the giftcard in this holder. I love the softness of the blush blossom and the chocolate chip. This image is a level 2 hostess set from the holiday mini catalog called Snow Buddies. Again, we only colored the nose and used glitter to make it sparkle! 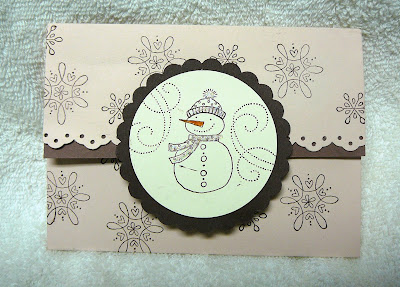 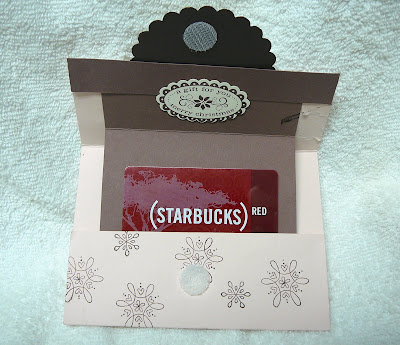 I received one of these cards from my girlfriend Lynn for my birthday and just HAD to make one of these as well. She shared some instructions with me created by the ever-talented Andrea Walford. These instructions are available for purchase for SU demonstrators through Andrea's Demo to Demo site. 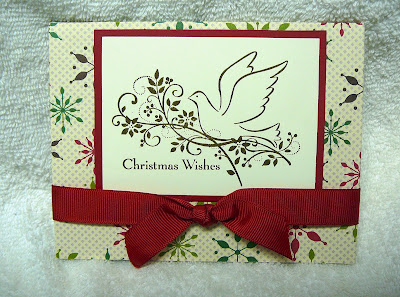 Here's what it looks like inside. The DSP used is from the Merry Moments set. 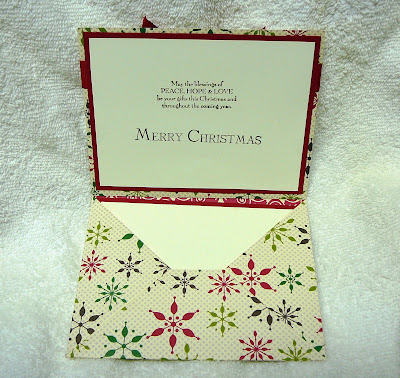 The idea for the next GCH also is from Andrea Walford. Her version is way smaller than the one we created - see her video tutorial HERE. I wanted this to be a full sized card so I changed all of the measurements and embellishments. I love this teal DSP called Holiday Lounge and I just love the Dasher reindeer (under $10 stamp). 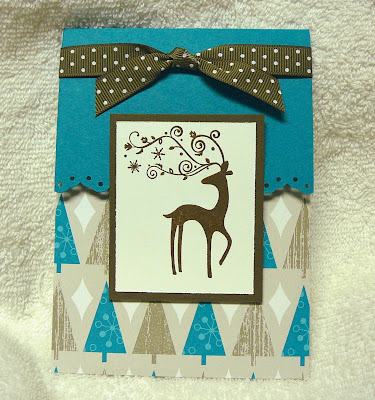 Here's a peek of the inside card. You could attach a giftcard with a mini glue dot if you wanted to. 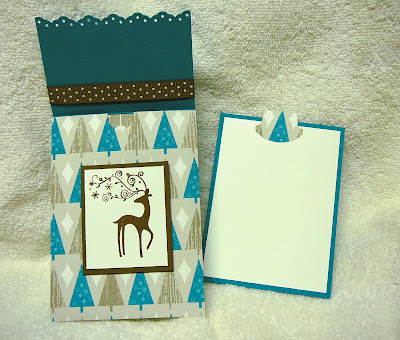 The final GCH that we made was inspired by Angie Juda of Chic'n'scratch...Angie also has such fabulous ideas! Catch her video tutorial HERE 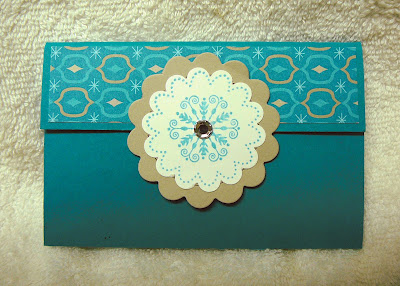 The inside of this GCH is one envelope cut in half, so clever! 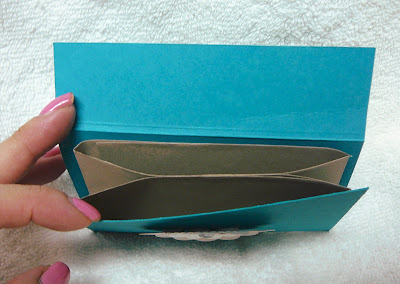 I just want to mention that although these GCH's were originally created by other people, the GCH's that you see here were all my own selection of color, materials and embellishments. I love to get inspiration from people so thank you to the ladies who created these really cool GCH's.
For the ladies that attended, I hope you enjoyed the class as much as I did. If you ordered kits, sorry, I'm still working on scoring some of the cards since the 12X12 paper cannot fit nicely in an envelope! Tomorrow, I will post the bonus projects - we did two!
Also, for the ladies who signed up for the October OCS, I'm so sorry that I haven't been able to email yet!! This has never happened before where I was this late. I promise it will be real soon. I will extend the time to get the cards to your partners til the end of the month. Thanks for your visit today!
Posted by Teri at Friday, October 09, 2009

Beautiful gift card holders!
As much as I always favor snowmen ;) I am loving the one with the reindeer!
TFS :*)
~ margie

I love these gift card holders! Thanks for the inspiration--I gotta make me some for Christmas!

I just love how all the GCH turned out. One of these days I hope to be able to make it to one of your classes. TFS!

Love these Teri! You are so darn creative! Glad your classes went well and can't wait to hang out tomorrow. I hope it is really cold and the ac is blasting cause I can't handle it at my house in this heat, lol. See you tomorrow!

love those GCHs! I need to try some of them! they are so cute! it was fun to see everyone at your house! thanks for letting me stay late and learn a new thing! can't wait till tomorrow! call you later today!

Yah! I got to see these in person yesterday and they were really nice projects!!! Funny how we did the same one too like the one I did for the tv show. I'll bring it next week when I see you for lunch. Have fun tomorrow and hope you finished your rak's.

These are all super Teri! Can't pick a fav!

Hey T! I loved this class! Thanks so much for always coming up with the best projects! Had so much fun yesterday at Claudie's! We gotta get together for lunch one day soon, k? TTYL and take care! xoxo, Linda

These GCH are all so beautiful!