Placing a name with a face Island Style

Happy Friday friends! I'm sure I'm the last to post stuff about our gathering that we had last week for a bunch of island girls but as always, no time to do the posting!!
Although it was so nice to see everyone, I'm not sure if I will be able to organize another one next year. It really took the wind out of me and I can't believe that I had a hard time bouncing back! Well, today, I'm sharing the projects that we did. I hope everyone enjoyed making them.
The first project was a cute Halloween box cut out with my Big Shot Pro. I'm so glad I invested in this machine. It is so easy to use and cuts with ease. I used Bazzill Bling cardstock for this box. The goofy pumpkin we created to decorate our box used a large circle punch, small square punch for the teeth and we actually used googlie eyes on the projects (I didn't have any for my sample here). The idea for this pumpkin actually came from the cricut cartridge called Mini Monsters. After cutting one out, I decided that it wasn't a good idea to use the cricut version because of all of the small pieces I would have to cut out and store before assembling it so I decided to create my own similar to the one on the cartridge. The leaf is an actual piece cut out with the cricut. For the mouth, I punched out a 1 3/4" circle (SU punch) and then used the punch again to form the smile. The cool ribbon is from Flora Dec and guess what? it is on sale! One roll of 25 yards is under $4.00! It comes in orange/black and white/black too! Okay, everybody run down before it's all gone! 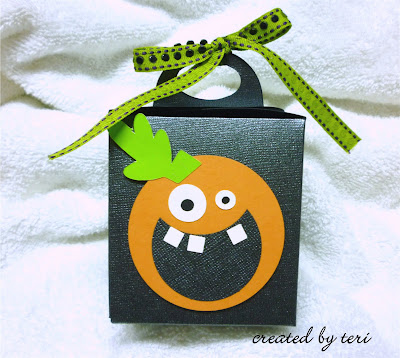 I was very lucky to receive a donation of black and white fully adhesive craft paper for my project. Originally, the project was going to be something using Hello Kitty, but after loving the easy projects using my Create-a-Critter cartridge, I decided to "scrap" the kitty project and go with this cute panda. The bamboo was also cut using the 3M craft paper and all we had to do was peel and stick! Did you guys like it?? I'm not sure if it's still on sale at Fisher, but the price was something unreal like $4.29/pack? I stocked up but don't worry, I left some for you guys! haha! 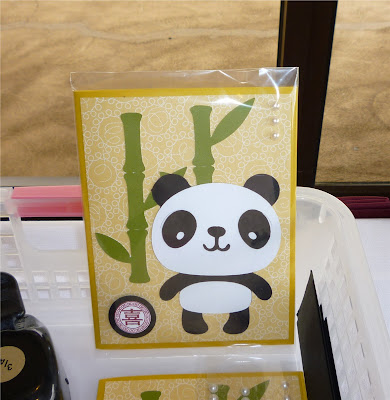 We also made a couple of gift card holders using pretty pink bling cardstock by Bazzill...love the irridescent shine! For the first GCH, I used a new image by Dandelion Designs. Isn't this the cutest?? You can get your hands on this image and the whole collection at your favorite craft store. You can also check out their website HERE! 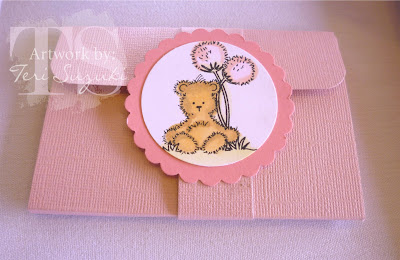 The second GCH was exactly the same except we decorated it with the Martha Stewart waterlily punches (large and small). This turned out so pretty! 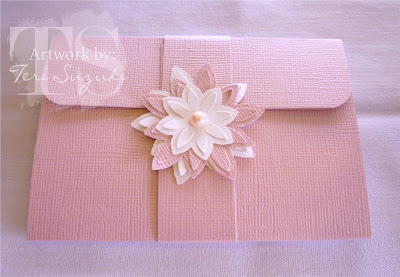 Thanks for stopping by today and taking a peek at my post!
Posted by Teri at Friday, September 03, 2010

Such cute projects! Love the ribbon! I'm a ribbon fanatic, so I gotta get me some of that -- and the 3m paper, too. =)

i loved the projects, the shopping, and everything else about the get together! you did such a great job!

It was so much fun- thank you so much for coordinating everything! I think you need more helpers if you decide to do it again... I can help! I loved all the projects- especially the pumpkin! And the GC holders... and the panda card... I guess I loved them all!

loved the projects! never put them together yet, but I did stamp all that I needed to do to make it. love all your hard work and effort to put the social together. sometimes you have to realize that it's all worth the hard work, stress and effort in the end...or if it's not and you just say: #@$% it! hope all is well with you. have a good weekend! I will enjoy myself. I get to hang with the boys and par-tay! I need it! see you soon!

Teri!
Thanks again for a wonderful day! The projects were so much fun and that pumpkin was way to cute with missing teeth! :)

great projects! better jump start on my halloween projects too :) TFS have a great weekend!!

Thank you for all your hard work coordinating the social! It was a huge success! I totally enjoyed creating all the projects! I even finished the the GC holders at home! Usually I tuck those unfinished projects away & forget about them. I had to finish those, to cute not too!
Tammy

TFS all of your projects and I'm sure all of the gals who attended appreciate your hard work. If you decide to do this again, DELEGATE, and I'm sure you'll have lots of takers to help you. Enjoy your long weekend.

Your creations are all so beautiful! I agree with you that ribbon is gorgeous & a great price to boot!

Want to add my Thanks!!! too, for such an outstsnding event. From last year to this, you added a lot ...no wonder you're pooped. Probably a good idea to take a sabbatical! The projects were cute, the food & people were great, in addition the door prizes & shopping. "If" you do it again, I would be glad to help too. Till then, rest up & take care :-)

These projects were really fun Teri! I loved creating all of them!! It was a fun gathering and I know you had lots of planning to do to get all of us together!! Thanks so much!
Hugs
Jodi =)

These are so cute!

Awesome creations Teri! I love the panda one! All this textured paper rocks!

These are great looking idea samples...love the panda - Cool blog - such a happy place...