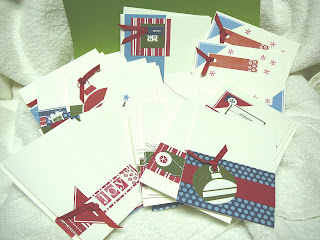 I was hoping to do my Christmas in July class in July! At this class, we would make 50 Christmas cards using one simply scrappin' kit and one pack of whisper white 8 1/2 X 11 cardstock and red ribbon. Cool, huh! I still yet have to adapt all of the cards I made from the old SS holiday kit to the new SS kit called Winter Bright. I did, however, manage to make 57 cards from the retired Christmas SS kit that I was hoping was still going to be in the catty. Oh well, here's a sneak peek at what kind of cards I made. 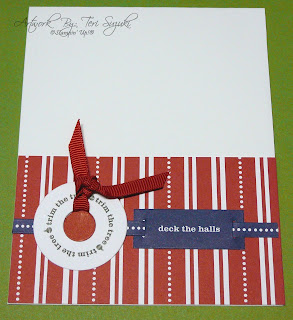 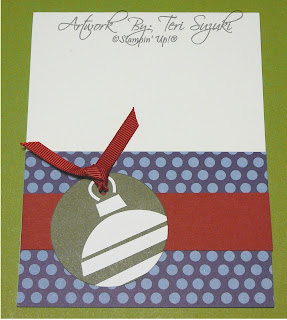 This cool idea came about when I saw that SU demonstrator, Shari Caspers, whom I met during one of the demonstrations on the Panama Canal cruise, made 60 cards using the Today & Always SS kit and one pack of vanilla CS. Her cards were adorable! She also graciously emailed me her instructions on how to cut all of the pieces, but OMG, I tried and then I got frustrated because there were no photos for me to compare her notes with. So... I thought to myself that I should just try to "wing it" and use my creativity to make those cards. After the first few, I was on a roll and then kept rolling until I was out of ideas with the few stickers that were left. I love how they all turned out! I gotta say that when I first started making the cards, they looked too white like something was missing...I guess I'm so anal that I like to keep adding stuff to my card and forget how to keep it simple. After I was on that roll, I started getting used to the whiteness and now, I really love those cards!!
I've gotta work on the new set of 50 cards...class will still be moved to August for both customers and demonstrators :)
Posted by Teri at Saturday, July 14, 2007

I love the "whiteness" they look so professional that way. Great idea thanks for sharing!!!

you are crazy...when you told me you made that many cards...I can't even make 3 cards in one hour. it takes me too long! all I can say is WOW!

Teri, thanks for your AWESOME inspiration!...This will make for a GREAT class...I am ordering Winter Bright SS this morning!!
Blessings, Debbie