Cards for Matthew, a wounded soldier, won't you send one?

Happy Wednesday! I'm a little late in posting today. I took a day off from work to spend it with Nolan and Eric. We ended up going to the BODIES exhibit. The exhibit displays real human bodies so I thought it would be gross, but when my co-worker, Kristen told me that her niece went and said it was very interesting, I knew it was something that Nolan would enjoy. It was really well displayed with alot of neat information posted on the display cases as well as on the walls by the displays. Although it was a little pricey ($26/adult) we were able to pay "Kama'aina" rates, which was only $3 less but $23/adult and $18 for Nolan. It was really worth it and so educational. This display will be shown until January, so for you local peeps here, if you get a chance, go check it out! 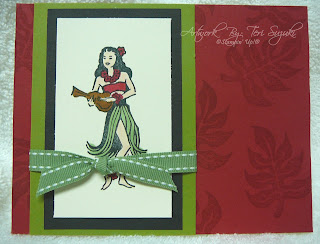 I got an email from Gina Wrona, asking for cards for a wounded marine. Debbi (no "e" at the end) is coordinating collecting and mailing cards for Matthew who was wounded in combat. Here's the card I sent over to Debbi for Matthew to cheer him up! If you have a moment and would like to share some of your "Aloha", send a card to Matthew, won't you?? Here's the link to Debbi's post about Matthew
Mahalo and aloha!

Teri,
I am glad that you and your family at a fun and educational time at the BODIES exhibit. I think Benson and I went to a similar exhibit a few years ago out it. It was pretty interesting.
I was actually getting ready to make a card for another person in the service so I will be more than happy to make one for Matthew too.

Your card looks so awesome!
Mahalo for posting it on your blog and mentioning me as well. Debbi is doing an awesome job w/all the cards for the troops everywhere. She told me that she will be sending cards to him as long as he is in the hospital.

Nice card Teri! Also good to know someone who went to Bodies, were thinking of going too.

Very cute card Teri!
TFS the info. and I will check out Debi's link:)

Thanks so much for posting this....I really appreciate it....as I am sure Matthew & his family will. I also send cards to the troops to send home to their loved ones if any of your readers are interested in participating in that also. Woke this morning to news that Blogger locked my blog because their bot identified it as potentional 'spam blog' so not sure when I will get to post again but I'm there. Will add link to ur blog when I can too. Have a great weekend.

Teri you have a heart that is overflowing with love to give. The card is beautiful! I think Matthew will love it. BTW, I LOVE the new banner. SO, so, so cute, just like you. Hugs, Jenn